Have you ever rowed in a boat and wondered who it is named after? Invariably, boats are named after people in recognition of their contributions to the sport of rowing, with particular emphasis on touring.

While our tours are on a haitus, we will tell you a little about those after whom OAR boats are named, starting with the Ernst Peters.

Ernst got his start into rowing at a young age when he was enrolled at his local club in Germany. He would ride his bicycle 40 km one way to his newfound sport. After a few years, Ernst took over as youth leader at Hansa Dortmund. He continued his sport no matter where his career took him, whether in England, Spain, Belgium or at last Canada. In the 1970s Ernst raced in the annual marathon regatta in Liege, Belgium on the Maas River and in the Head of the River Race on the Thames in London, England, often with his family as cheerleaders.

When Ernst and his wife Carin decided to immigrate to Canada, Ernst made sure to choose a house close to a rowing club. He’s been a lifelong member of the Don Rowing Club since 1978, at a time when the club had less than 100 members, and raced in many regattas as a Master in quads and eights.

Ernst was very involved with the club throughout the years, first establishing the Tops and Bottoms Regatta, which was later renamed the Tony Fooks Regatta, for the purpose of forging a strong connection to the neighbouring clubs. Ernst was also instrumental in helping fundraise and then plan for the construction of the club addition with a second story to the boathouse and finally the club’s own rowing tank, and thus became a ‘welcome sight’ in Mayor Hazel McCallion’s office.

Wishing to bring his passion for touring over to Canada, he brought over a three-person rowing boat, named “The Koenigsberg” from Hansa Dortmund Rowing Club which was then kept in Peterborough. Ernst was instrumental in twinning the Don Rowing Club with the Hansa Rowing Club, and starting up regular exchange visits between youth and adult rowers of both countries, including hosting and finding billets.

He worked with Hudson Boatworks to develop the touring boats locally, which include wider shells for greater stability in rough waters, space for some luggage, bilge pumps and other touring specific features and championed many rowing tours all over the province. Ernst put many kilometres onto his VW Passat driving the boats all over Ontario for various club tours. 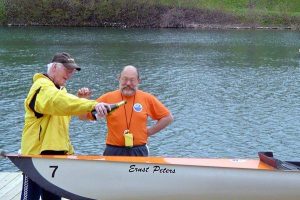 In 2002 Ernst organized the first official FISA rowing tour in Canada, on the Rideau Canal, with a trial tour the year before. Since then, touring has taken off in southern Ontario with many clubs offering a tour or two during the summer. For more than a decade, Ernst has put on the Banana Belt Tour, held in Welland, and with it being the first tour in the season, it’s quite popular.

Covid has tried to slow Ernst down but even without his work, he is as busy as ever, learning new skills as he works around the house and garden and going for long walks as he discovers and rediscovers new trails. He is affectionately known by Carin as her Shopper-in-Training and Ernst is working toward his Masters in this field. (It may take him a few more years though).

Thanks to Ernst’s daughter Carina and her brother for supplying this information.